Eastern Nebraska is covered with rugged bluffs, rolling hills, picturesque valleys and lush vegetation. The Great Plains stretch westward across 75 percent of the state and include rock formations, eroded hills and deep canyons. The Sandhills, North America’s largest grass-stabilized sand dune formation, cover sections of western and central Nebraska and include the Nebraska National Forest near Halsey (the world’s largest hand-planted forest). The High Plains are northwest, southwest, and west of the Sandhills. Within this 12,000 sq. mi. (31,080 sq. km) area lie the scenic and rugged Wildcat Hills, the Pine Ridge, and the North Platte River Valley. A small portion of South Dakota’s Badlands extends into northwest Nebraska.

Nebraska spans two time zones. The eastern two-thirds of the state is in the Central Time Zone and the western third is in the Mountain Time Zone. When traveling on Interstate 80, the time change occurs between the Sutherland and Paxton exits.

Founded in 1856 as the village of Lancaster, Lincoln became the state capital upon Nebraska’s admission to the Union on March 1, 1867.

Nebraska is the only state with a single house Legislature, the Unicameral. U.S. Senator George W. Norris from McCook promoted the conversion of all state legislatures to the unicameral system. However, it was implemented only in Nebraska in 1934. The Unicameral is different in that when candidates run for office, they do not run on party tickets (at least in theory).

Nebraska is predominately a rural state, with the majority of its communities having populations of less than 5,000. The state’s smallest incorporated town is Monowi (pop. 1) in north central Nebraska.

In 1895, Nebraska’s original state name was the Tree Planters’ State because its claim to tree-planting fame includes the founding of Arbor Day in 1872 by J. Sterling Morton, the Timber Culture Act of U.S. Senator Phineas Hitchcock (1873) and the millions of trees planted by early settlers. The official state name was changed to the Cornhusker State in 1945, a reference to the method of harvesting or “husking” corn by hand, which was common before the invention of husking machinery.

Nebraska offers a full four-season climate. The normal average daily temperatures range from -20˚F (-7˚C) in the winter to more than 75˚F (24˚C) in the summer. Annual precipitation ranges from more than 30" (762 mm) in the southeast to less than 17" (432 mm) in western Nebraska. 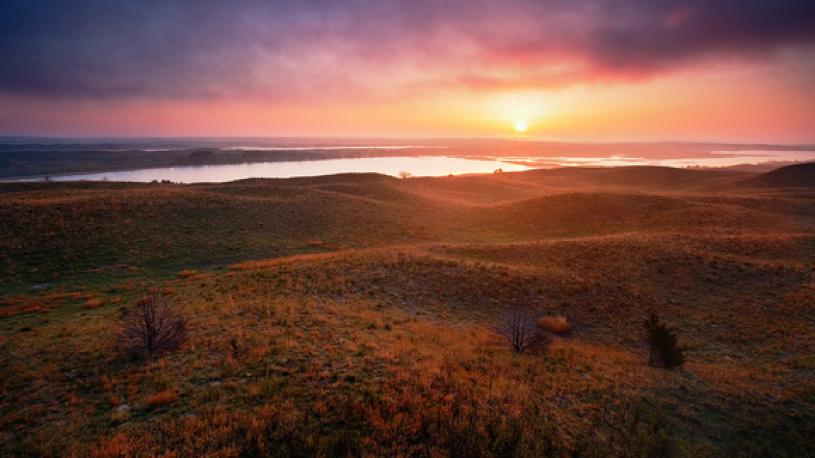