So. You came to see the cranes. Here's what to expect.

When I first heard about Nebraska's sandhill cranes, I didn’t get it. What could be so special about a common bird? And was it worth waking up at 4 a.m. to see their migration? Spoiler alert: YES.

I woke up in my hammock at 4 a.m. to the alarm on my watch. It was still about 35 degrees outside with a steady breeze; I was reluctant to leave the warmth of my mummy-style sleeping bag. I poked my head out and glanced at two other tents, containing my dad and our friend. I had the bright idea of signing us up for a 5 a.m. tour at the Crane Trust in Wood River (near Grand Island) and convincing my party that it would be a good idea to camp out the night before. I called out the sleeping men's names in the brisk morning air and got a grunt from each tent. We packed our gear and hopped in my dad’s truck to make our way to the Crane Trust.

After a short stint westward down I-80, we arrived at the Alda exit, where the Crane Trust Nature and Visitors Center waits just south of the interstate. Inside the dimly lit facility we were greeted by a farmer wearing coveralls. He welcomed us and gestured toward a few empty seats in a nearby room containing about eight other people. He introduced himself and listed off a few rules we were to follow once we reached and entered the blind: no flash photography or bright lights; silence cell phones . . those were the ones that stuck. The farmer directed us back to our vehicles and instructed us to follow him with our headlights off. We made our way down the highway a mile or so and pulled into a private drive where we exited our vehicles and made our way to the viewing blind.

I entered the blind and was met with an unforgettable view: the Platte River lay still with the moon clinging to the horizon, refusing to disappear. My eyes began to adjust to the darkness and shapes started to appear on the river. Those black masses resting on the Platte that I had originally assumed were sandbars morphed into groups of sandhill cranes. I had no idea there would be so many.

The sun began to spill over the horizon, and I noticed something: the sound. No; not the soft flutter of nearby camera shutters, but the cranes. They were getting louder. The sound is oddly soothing, if you can imagine a bird purring and then multiplying it by 15,000.

Too soon, it seemed like the farmer quietly informed us that we were nearing the end of our time in the blind. We took a few last good looks at the cranes beginning to take flight into the sunrise. We packed up our camera equipment and discreetly exited the blind. After experiencing Nebraska's annual sandhill crane migration, no video I've watched has done it justice. You have to experience it in person to understand.

A balanced itinerary for birders

Day 1 Kick your road trip off in Kearney with a visit to The Archway. You’ll learn about pioneers, Pony ... 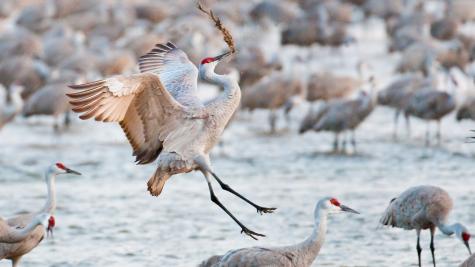